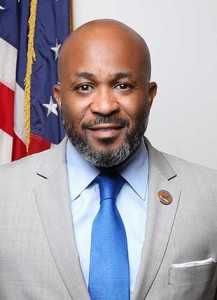 Born in Rocky Mount, NC and a near lifelong resident of Essex County, Councilman Vick possessed a burning desire to reside in a burgeoning community that sought to put the needs of the residents at the forefront of the decision-making process.  It was his work with Mayor Anthony Vauss on his inaugural campaign for Mayor that afforded him the opportunity to go door-to-door and interact with the residents and business owners of Irvington. Embracing Mayor Vauss’ credo of a “Clean and Safe” Irvington, Councilman Vick made the decision to join the residents of Irvington in their efforts to restore the luster to our Township.  Shortly thereafter, he “put his money where his mouth was” and purchased his second property in Irvington – a vacant home in the North Ward where he currently resides.

In 2014, Councilman Vick further solidified his commitment to the residents and businesses of Irvington by forgoing a lucrative career in the private sector and accepting a position in the Vauss Administration.  His zest to serve and relentless work ethic saw him rise through the ranks of the administration and eventually earn the position of Deputy Director of the Department of Public Work (DPW). In that capacity, he teamed with the residents and business owners to eradicate quality of life issues discussed during his initial door-to-door interactions and frequent field visits.

As Deputy Director, Councilman Vick collaborated with the Director of Public Works to improve the condition of our parks and recreation facilities, public municipal facilities, road maintenance, recycling and garbage disposal, cleaning vacant lots and the overall beautification of our Township.  These efforts have positively stimulated Irvington residents and businesses as well as visitors to our beautiful Township.

That same year, Councilman Vick tackled another of the primary concerns of our residents, the quality of our school system.  He successfully campaigned for a position on our Irvington School Board and joined a dynamic team of like-minded individuals who are committed to the success of our children – academically and socially.

During his tenure on our Irvington School Board, the community and his peers recognized Councilman Vick as a relentless advocate for improving educational opportunities for our children while simultaneously improving our school facilities.  He served on nearly every School Board Committee and as Chairman of Curriculum, Buildings and Grounds, and Community Relations. The symbiotic relationship between the Administration, School Board and our residents and advocates lead to astonishingly positive results.  Councilman Vick acknowledges the exponential rise in the graduation rates and number of students attending 4-year universities, including several Ivy League Universities as high on his list of proud accomplishments.

Councilman Vick’s commitment to the advancement our children was realized when his concerted efforts were instrumental in the opening of Madison Avenue Elementary School – the first school built from the ground up in our Township since 2005.  In recognition of his tireless contributions to our students, his constituents tabbed him to serve as President of our Irvington School Board.

Residents acknowledged his efforts to bolster the community and on June 5, 2018, elected Councilman Vick to represent the greater community as the North Ward, 2nd District Member of the Democratic County Committee of Essex County.

Following the untimely passing of beloved North Ward Councilman and Council President David Lyons, Mayor Vauss tabbed him to fill the vacant seat and further the legacy of Councilman Lyons.  During the November 5, 2019 general election, the residents of Irvington displayed resounding affirmation and selected Councilman Vick to serve as our North Ward Councilman.

As Councilman, he vows to further his commitment to residents, business owners and visitors to our Township.  He will continue his policy of direct interactions where residents are able to readily reach him, including by cell phone and frequent visits to local establishments.  He pledges to make decisions steeped in his fiduciary responsibilities to the taxpayers of Irvington in efforts to further stabilize our tax rates. He will pool resources with other government agencies to further tap into the vast resources and strategic location of our Township to attract businesses that will bring jobs to our community and offer stability to our tax base.  Councilman Vick recognizes the value of “Community” and champions quality of life enhancements through community forums and further dialogue with the residents of the North Ward and the Township as a whole.

In the words of Councilman Vick – “I pledge to work in partnership with my constituents to foster a Clean and Safe community where we can all be proud to say I live in the North Ward, I live in Irvington”.