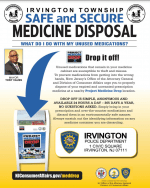 Director Tracy Bowers graduated from Irvington High School and is a veteran of the United States Navy. He attended Rutgers University and Fairleigh Dickinson University. He is a member of Omega Psi Phi Fraternity Incorporated and Samson Lodge #66, PHA. He is also the past president of the Golden Shields Association and past Vice President of the Superior Officer’s Association.