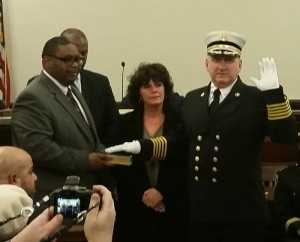 “I am pleased to promote Tierney from Deputy Chief to Chief of the Fire Department,” said Mayor Vauss. “He has had an exemplary record in the department throughout his 31 years of service. Irvington promotes from within. We have many qualified officers and employees, such as Chief Tierney. All they need is a chance.”

For information please call: Stephanie Bush-Baskette, Aide to the Mayor at sbush-baskette@irvingtonnj.org.