Tony Vauss, who was a former Assistant to the Director in the Township’s Department of Neighborhood Services, was elected Mayor May 13th 2014.

He campaigned on attracting new businesses to the Township, as a way to raise both revenue and the profile of the Township.

His political career began as a volunteer in 2004. As a volunteer, he learned many things about the political process and desired to become involved to better serve his community. Tony founded the Tony Vauss Civic Association, which offered a plethora of community activities. These activities included adult basketball, programming for both senior citizens and children, and humanitarian meals for the less fortunate in the Irvington community.

In April 2006, Tony was afforded the opportunity to run for public office as a member of the Irvington Board of Education. Also, in June 2006, Tony was elected district leader for Northward District 2. Tony quickly emerged as one of the most influential leaders in Irvington. Under the leadership of the Honorable D. Bilal Beasley and Councilwoman Lebby Jones, Tony has successfully run campaigns on the state, county, and local levels. 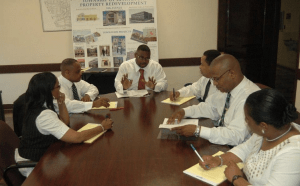 Tony just completed serving his third term on the Irvington Board of Education, where he has served with honor and distinction. Tony has served as a Board Member, Vice President (three years), and concluded his service as the President (three years) of the Irvington Board of Education. Tony’s passion and love for the community is unwavering. He is a member of the Martin Luther King Heritage Committee, Al Sharpton’s National Action Network and the NAACP. Above all, Tony is a committed resident of Irvington, as well as Essex County.

As a proud resident, Tony has received awards from the Irvington Board of Education, a proclamation from the Office of Irvington Mayor for community service, two resolutions from the General Assembly of the State of New Jersey and the Essex County Board of Freeholders acknowledging his community contributions, as well as awards from local churches and clergy. 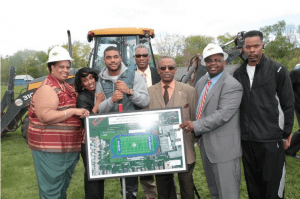 Furthermore, Tony hosts countless events each year in conjunction with radio personalities, celebrities and sports figures, to support his benevolence for the community of Irvington. Most noteworthy, Tony has mentored, inspired and supported many of our local officials and leaders.  This dedication to servant leadership can be encapsulated by one of his favorite quotes, told to him by one of his mentors, D. Bilal Beasley. “It is a boss who tells you what to do, but a leader shows you how!”

Tony Vauss is unquestionably, a leader, and a champion for the Township of Irvington and he is prepared to lead this Township through his vision, dedication and leadership to deal with the issues that matter most to the Residents of Irvington: •  Fighting for Public Education•  Confronting the Affordable Housing Crisis•  Protecting the Vulnerable•  Promoting Business Growth and a Skilled Township•  Helping to expanding Access to Quality, Affordable Healthcare•  Embracing Irvington’s Diversity•  Fighting for Irvingtons’s Fair Share