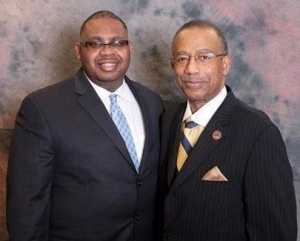 Essex County Freeholder D. Bilal Beasley died on December 22, 2014. For more than two decades, he served Irvington as an elected representative as a councilman and freeholder. He was also the Irvington Democratic Chair.

“I am greatly saddened by the passing of my friend and mentor, Freeholder Beasley,” said Mayor Vauss. “He gave so much to this town as a councilman, freeholder, Democratic chair, and resident. I mourn his passing and my prayers and condolences go out to his wife, children and family.”

As a public servant for Irvington, Mr. Beasley worked to improve housing and support redevelopment in the town. He worked at the Newark Housing and Redevelopment Authority and was a commissioner of the Irvington Housing Authority.

Mr. Beasley began his career as an elected official in 1988 when he became a member of the Irvington Township Municipal Council. He served on the Council through June 2014 and was Council President from 2012 until 2014. Freeholder Beasley was first elected to the Essex County Board of Chosen Freeholders in 2002. He was reelected for three terms thereafter and would have completed his last term this month.

Mr. Beasley was a founding member of the Newark Emergency Services for Families and an active member in the Irvington Chapter of the NAACP, Chairman of the Irvington Dr. Martin Luther King, Jr., Commemorative Committee, the South Ward Joint Block Association and Friends of Irvington Park.

“I’ve been blessed to have Bilal Beasley as my mentor, father, brother and friend,” said Mayor Vauss, “The world knows him as a leader but at the heart of him, he was a teacher. I thank him for who he was in my life. May he rest in peace.”